Respect Your Cat (Every) Day 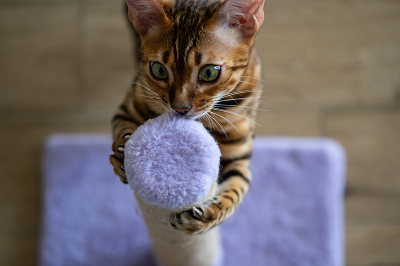 March 28th marks “Respect Your Cat Day” and the Canadian province of Quebec is doing its part. Last week, its government drafted legislation to ban declawing procedures in cats (starting summer 2022) unless deemed medically necessary by a veterinarian. The most common reason for this elective procedure is motivated by cosmetics and convenience, to protect the cat owner’s furniture, carpets, and clothing. But at what cost to the clawless cat? And why are so many animal health organizations and governments taking active measures to ban or restrict the practice? Well, out of respect for the cat, of course!

The terms onychectomy and declaw imply the removal of a cat’s claws, but it requires amputation of the distal phalanges (end bones) of a cat’s toes for complete removal. When performed, typically only the front paws are declawed. Despite improvements in surgical techniques and pain medication, the procedure is extremely painful for the cat. It can also lead to other medical complications later in life, especially back pain, caused by the cat’s altered gait and overcompensation from the pelvic limbs due to chronic pain in the front paws.

Cats use their claws for basic daily functions, such as chemical and visual communication, play, stretching, and for survival (hunting, climbing, and self-defense). Given this, the impact of declawing on a cat’s welfare is immediate and detrimental. Proponents for declawing argue that it reduces the odds of a cat being abandoned or surrendered to a shelter by eliminating undesirable scratching behavior. However, several studies have shown that most cats develop new undesirable behaviors after being declawed including aggressive biting and house-soiling. It has also been reported that declawed cats are more likely to be surrendered for house-soiling than cats that have not been declawed.

Considering all of the negative physiological and psychological effects of declawing, many animal health organizations like the American Animal Hospital Association, the American Association of Feline Practitioners, and the World Small Animal Veterinary Association have taken positions against declawing cats. Taking it a step further, 22 countries have either legally banned or placed significant restrictions on the procedure, including the United Kingdom, Australia, New Zealand, Israel, Turkey, Brazil, Japan, and in most parts of the United States and Canada.

Saluting Quebec’s provincial government is one way you can respect the claws in your cat’s paws. Here are a few ideas you can try at home to show your cat (likely unaware of the news headlines) that you really mean it:

If your cat is scratching where you don’t want her to, like your sofa, there are ways to direct her toward her own scratching surfaces without punishment (because that never actually works). The trick is to make her stuff exciting to scratch, so your stuff becomes boring! Try these tips:

To you and your feline friends, have a happy Respect Your Cat (Every) Day!