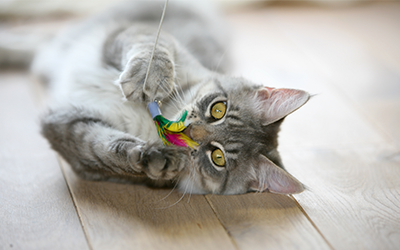 Cat lovers rule the world! Well, maybe not completely but there certainly are a lot of them. Here’s what we know:

Cats became domesticated about 12,000 years ago, and in a unique way. As humans moved from a hunter-gatherer to an agricultural lifestyle, cats took advantage and moved in to hunt rodents in granaries. Early farmers recognized the important role that cats played in vermin management. It was a win-win situation – cats got free food and people got free pest control!

Ancient Egyptians likely saw this benefit too, and the cat became a respected animal in Egyptian culture. It is well documented that cats were part of Egyptian family life, pampered, and adorned with jewels. Cats were so valued that the penalty for killing a cat in ancient Egypt was death.

Today, cats are generally well-regarded and often considered members of our families. They are a joy in our lives and offer many health benefits – aside from vermin control!

Aside from the obvious love your cat gives you, there are a lot of benefits to owning a cat. Whether you are a cat owner, or just like watching cat videos on YouTube, December is the month to celebrate our feline friends. Give your cat an extra snuggle or belly rub – or take in a few cat videos on your lunch break!